I’m not really into wrestling.  I can go years without watching it on TV.  When I do, it is usually to figure out who’s who in the latest wrestling game.. I enjoyed the PS3 versions of the WWE 2K series (and the SmackDown Vs Raw before that) for the create a wrestler features that allow me to create my own characters and fight.  I especially like creating my own Divas (WWE’s term for women wrestlers) and had many of them, from original ones to ones from other video games, movies, TV and music.  2k Games (who took over for THQ when they went bankrupt) brought the series to the PS4 last year with WWE 2k15, but without many of the features that it had in the last gen, including the ability to create female wrestlers.  That make many fans, including me, unhappy with the game.  This year, however, 2K has brought back some features that the fans demanded.

WWE 2k16 is a wrestling game based on the WWE wrestling promotion.  It is developed by YUKE’s Future Media Creators and Visual Concepts and published by 2K Sports.  It is the 17th game in the WWE game series (going back to WWF SmackDown! from 2000) and is the second for the Current console generation.  The game  is available for the PS4, Xbox One, PS3 and Xbox 360.  This review is for the PS4 version.

The game, similar to the previous versions  has three game modes.  Play allows you to play any match type, from One on One, Tag Team, Triple Threat, Fatal Four Way, 6 Man, Handicap, Tournament and Royal Rumble.  All match types, save Royal Rumble are playable by wrestlers of either sex (though inter-gender matches, sadly, are still not allowed.)  Then there is MyCareer, where you create a (male) wrestler and play as he rises to become a WWE Superstar.  This year’s 2K Showcase features Stone Cold Steve Austin as you replay some of this most memorable matches and unlock challenges in Special Objective sub-mode.  Finally WWE Universe is back, as you can manage the different brands, add you won created wrestlers and play through a year of WWE shows, or ones that you create.

Yes, the creation suite is back and features the return of Create-a-Show and Create-An-Arena.  Using the logo manager, you can upload custom images to the WWE 2k servers and download them into your game.  You can use it to recreate your favorite wrestling promotion’s set up (such as WCW or TNA) or create your own (The Brazzers arena I downloaded had an interesting design that makes the floor seem REALLY sticky.)  You can also use custom images to create you own title.  You can even choose how Lillian Garcia announces your created title with up to 8 choices  You can also create tag team belts and choose what gender completes for them  Yes, women’s tag team belts are possible and you can have you custom Diva compete for it.

Yes, the Create-a-Wrestler mode has corrected its omission and brought back custom Divas.  There is a variety of custom faces available, which is good because the face morphing tools is complicated  as ye adjust the shape of face parts by moving points around its shape.  You can also map a face form a picture though sometimes it looks off.  There is a variety of hair for each sex (more for males) though for the females, it is missing a few styles from the older games like high double ponytails.  The body shape slider is pretty straight forward, though the height scale is a mess as it doesn’t use feet and inches but a scale from 5.2 to 8.0. were 6.0 comes after 5.9.  and created divas, by default, are as tall as default created males.

As for the CAW clothing options, there is definitely more options than in WWE 2K15.  There are costume parts inspired by WWE performers in a separate tab and there is a  large selection of generic costume parts for both the head, torso and bottom.  There aren’t too many outlandish parts (though there are still halos and angel and demon wings, although smaller) and the sexes do not share parts, with the females not getting clothes like a karate gi and the males unable to wear female clothes,  Also there are no options for patterns, although you can upload a pattern as a logo an apply it to your character’s outfit, though results can be hit or miss.  The announcer name are now made of three parts, a nickname, first name and last name.  There is a large number of options and you can leave one or two blank if you wish.  You can also have one additional attire for your CAWs  Other than that, it is the same as last year.

The Create-a-Moveset and Create-an-Entrance also return.  The Create-a-Moveset is the same as last year, with some moves having their name changed to something generic if a Superstar is no longer with the WWE.  There are only 16 “generic” move set templates, each given a name to reflect what past Superstar inspired it (Charisma Personified is definitely Jeff Hardy).  Unfortunately there are no generic Diva inspired templates (AJ’s would have been nice, but Lita’s and Trish Stratus’s are available via paid DLC).  The Create-an-Entrance again features both an Easy Creation (copy an existing Entrance, adjusting only the video and music) or Advanced (adjust actions on stage, on ramp, outside and inside the ring separately).  Unfortunately there are not many generic entrances and no joke ones like “guy on cell phone” or “Clumsy wrestlers.”  the one they do have are let overs from wrestlers that go pulled from the game, like AJ Lee and the Great Kahli.  and the worse is not custom music.  This is more of an oversight of the system hardware as both the PS4 and Xbox One do not allow you to save music on the system (though they even removed it from the PS3/Xbox 360 versions).  If there is a way around it, I hope they include it in the next game.

You can also upload and download CAWS, custom arena and logos from the WWE 2k16 servers.  But, like the last few versions, the service is really unstable sometimes with the server becoming unavailable.  2k is working on it but it is a bone of contention on the forums.  There is also a limit of 20 downloads every 24 hours and a maximum of 100 custom logos (including those on CAWs or arenas you have downloaded.

For those of you who care about the actual wrestlers, there are a lot.  The game post over 120 WWE superstars (not including DLC), but there is a catch to it.  There are some wrestlers that have different version of themselves as individual characters.  Besides wrestles like Mick Foley who had multiple personas (Dude Love, Cactus Jack and Mankind are all in the game, there are two Big shows (one as Paul Wright) two Chris Jerichos, two Kanes, two Mark Henrys (None of which is Sexual Chocolate) two Rocks, three Stings, three Undertakers, three Triple H (including him as Hunter Hearst Helmsley), and five(!) Steve Austins (including Stunning and Superstar versions, with hair!).

When it does down to it, what makes a game is the gameplay and graphics.  The controls are almost the same as last year, with the pin kick out meter being different (hate it).  The graphic are nice, but looks the same as last year and there are a few glitches here and there.  Characters wearing long coast during entrances can have a glitch where the bottom of the coat gets stretch across the arena.  Sometimes the announcer messes up the names.  And, on occasion, when she wins, WWE Diva Paige turns invisible and you see an empty ring during the post-match celebration.  She doesn’t do that in real life.  At least, not the last time I checked (and I googled.).

Another thing that bothers me is with the custom logos.  While the uploading of the logos is great and a lot of folks are doing creative things, you have to upload the image and then download and it is available to everyone.  You cannot delete any images that you upload either.  I wish there was a custom logo move that you can create your own signs and/or be able to upload something that would only be downloadable by use and would disappear after 24 hours.  That way, if you wanted to create a logo that some might find objectionable that you wanted for you own person use, you could create it yourself offline in the game

WWE 2k16 is definitely better than the last game and is on the right track to improving even more.  While the creation suite is great, I still want to see modes like Create-a-Finisher and Create-an-Entrance movie return.  Custom story mode needs to make a comeback as well, as with being able to take game video and uploading them to You Tube and Twitch, I think a lot of folks would have a field day with it  Custom music would be nice, but between the hardware not allowing it (a step back) and the legality of being allowed to upload music (even though the game videos don’t include the Entrance music, even the WWE’s own!) I don’t see it happening.  I was ready to give up on this series after 2k15, but 2k16 roped me back in.  Fans from the THQ days and those who like the series up to 2k14 should check it out. 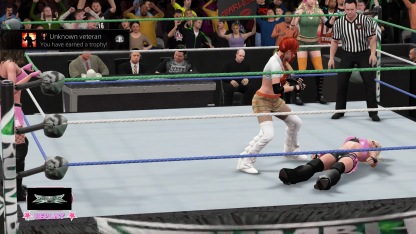 Nanci Drew (in her Part-Time Job attire) wins another match 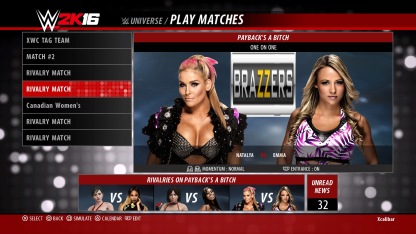