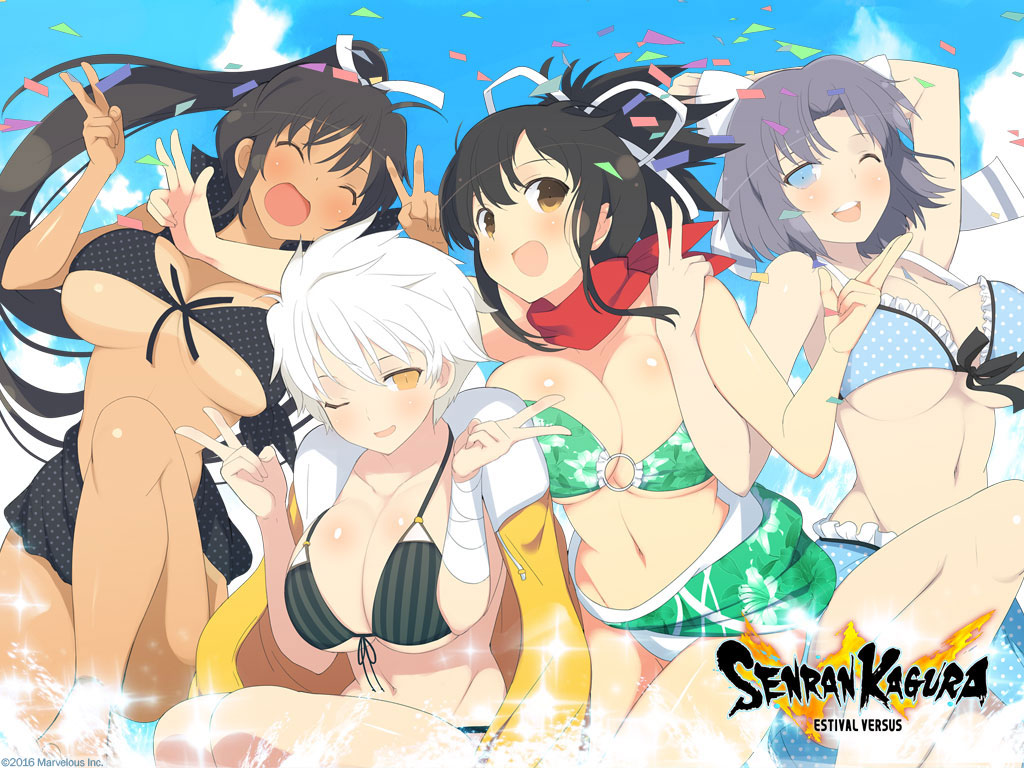 Estival Versus features all four factions from the previous game. After Ryobi and Ryona (from Hebijo Clandestine Girls’ Academy) encounter their long dead sister at a strange ceremony in the woods, they are transported to a tropical paradise dimension. Soon the other Hebijo Girls find themselves drawn into a bright light into this dimension, as are the other groups; Asuka and her friends from Hanzo, Yumi and her Gessen classmates as well as Homura and the rest of the Crimson Squad. Each group are set upon by mysterious ninja, the same group that had attacked them before at the hot springs (as shown in the Senran Kagura: Estival Versus Original Video Animation, not included but you can find it online). The girls fight their way through and all of them meet up and encounter their mysterious host.

The host is an old woman named Sayuri, a former Kagura or demon hunter. She is also Asuka’s maternal grandmother. She tells the girls that they are now part of the Kagura Millennial Festival, a 8 day celebration to honour those ninja who died in vain in order to give their spirits peace. The celebration includes a contest called the Shinobi Bon Dance, with each team competing against each other to see who can destroy the most shinobi platforms. Assisting Sayuri are Ryoki, the sister of Ryona and Ryobi who was killed by a yoma (demon) on a mission against Miyabi, and the Mikagura sisters, three shrine maidens with their own ninja arts and agenda. Sayuri should not be underestimated either because she holds power inside her.

The game plays pretty much the same as Shinovi versus, with some levels requiring you to defeat a group of enemies to be able to move on to your next objective within a large area or just a large battlefield where you fight until you win. Most of the time (not always) you will face off against up to three or the other characters and have to defeat them.  You still have tricks like Aerial Rave, where you launch you opponent and chase after and attack them in the air. You still have the three mode to fight in; Flash, where you fight in your normal form with no access to you ninja arts; Yang, where you use your shinobi transformation and have access to your ninja art attacks with increased strength; and Yin or Frantic, where you strip down to your underwear, increasing you speed, strength and power, but at the cost of your defence.

New to the game is being able to fight in missions along a partner. Unlike Deep Crimson for the 3DS, this partner is totally Ai controlled and shifts between modes when you do. However, you can do an Fusion Aerial Rave, where if you touch the screen (or touchpad for PS4) when you or your partner initiated and Aerial Rave, both of you will attack the launched target no matter where you were. There are also new power-ups in the form of bombs. Besides the standard exploding bomb, there are bombs that inflict status ailments on you opponents like fire, ice or poison. There are even bombs that render you invisible for ten seconds . And there are context-specific finishers in most (if not all) levels. If you defeat an opponent near certain objects, the final blow will send them into that object for an comical, embarrassing cut scene, in which, of course, there are rendered naked.

Here’s the Senran Kagura series’ main draw. Yes, the destructible clothing system is still intact. Each characters outfits can be torn away with enough damage. Powerful attacks will trigger a cut scene showing the character reacting. Unlike Shinovi Versus, the area you damage is not dependant on which type of attack you use (weak vs. strong). Outfits can be torn two times before the character is reduced to her lingerie and scraps of clothing. If enough of the costume was torn away and a powerful finishing blow was landed (or cut scene triggered) the character is stripped completely naked, with bright stars protecting their modesty.
The Shinobi transformation scenes are pretty much the same, too. There girls are naked once the transformation sequence starts, which is a magic girl trope from Japan since at least Sailor Moon (censored in the West) and the shinobi arts scroll appears, sometimes between their boobs, below their cleavage, behind their backs or appearing in…other areas. .We also get a close up of their outfits appearing onto their bodies with shots of their rear and chest. All the time any naughty bits are obscured either by a body part of by those glowing stars. Because, Lord knows, the world would lose its shit if they showed a nipple, animated or otherwise.

Customization is also a big thing in the Senran Kagura games and Estival Versus is no exception. You can customize your characters in the dressing room changing both their normal and post transformation outfits. Outfit and accessories can be bought with currency earned for completing missions. There is diorama mode in the dressing room in which you can pose up to three characters in the PS Vita or five on the PS4 and take a screenshot of them. There is also the touching mini-game in the dressing room. Using the touch screen on the Vita or on screen hands on the PS4, you, erm, well grope them until they like you (THIS IS NOT HOW IT WORKS IN REAL LIFE! DON’T DO THIS!!!) after which, if you touch their hands, you can “give” them a “kiss.” You can also tear off their clothing (DON”T EVEN THINK ABOUT IT!!!) by rubbing them on the PS Vita’s touch screen with the handheld vertical, which I cannot get to work, or, on the PS4, where, with the grope hands activated, you turn the DualShock 4 vertical and… shake it up and down (think about it…) Subtle, this game isn’t.

There are also DLC available at launch, with four free outfits that are cross-buy (buy for PS Vita, get it for PS4 as well.  Additional characters are also coming with Naraku and Kagura from Seran Kagura 2: Deep Crimson and a special guest character in the form of Ayane from Dead or Alive, reciprocating the Senran Kagura costume DLC for Dead or alive 5: Last Round.  I’m sure there will be more outfits and accessories in the near future.

Despite all the fan service this game offers (and uses as a selling point) the story of this game is pretty good (yes there is a story!) Ryona and Ryobi’s relationship with their dead sister Ryoki is one of the main beats of the story. While Ryona is thrilled to have her older sister back, Ryobi is not, still feeling guilty for telling Ryoki that she hopes she dies before the battle that claimed her life. Of course all this character development is undercut with Ryobi verbally abusing Ryona and Ryona loving it and demanding to be abused more. Seriously, Google search Ryona (BUT NOT IMAGE SEARCH, for your sanity’s sake) to see what fetish her name can refer to. Feel free to GIS Ryobi. All you get are pictures of power tools, which I don’t think has anything to do with the character.

There are other serious storylines for the other girls. Yumi and the Gessen girls have a part in which they encounter Kurokage, Yumi’s grandfather and teacher to all of the Gessen students. Miyabi also has a part in which she looks for the soul of her dead mother, who was killed by a Yoma when she was very young. Asuka also has her part to play, trying to figure out why her grandmother really brought them here and what her true motives are. But before you start to think you were getting some serious and deep storyline, it reminds you this is a Senran Kagura game with Katsuragi groping the other girls, Imu lusting after Miyabi and Haruka making up events like a panty-eating contest.

Now it is time for a bit of a rant. Now, I am not a big believer in censorship. I think it is stupid that we are afraid of showing nudity more than violence. Now there is violence in this game but it is not graphic and the nudity is fan service, but very cheesecake and all the naughty bits are censored for our protection. Some have objection with how the girls are portrayed.. They are just drawing, not real people and there is enough plausible deniability they the school as post-secondary and all the girls are of age (why would they release this if they were not?). I personally avoid using characters like Ryobi and Mirai because the whole jailbait look is not for me. So, if a game like this gets released in the West, why isn’t Dead or Alive Xtreme 3? It is much less violent, nobody gets stripped (those there might be a few near wardrobe malfunction scenes) and the swimsuits aren’t that far off of what you see in a Sports Illustrated Swimsuit video or, at worse, A Victoria’s Secret Fashion Show! Why doesn’t Koei Tecmo release it here? Marie Rose? Mirai is much worse and the official trailer for DOAX3 says Marie’s age is 18. How else would she travel to a tropical paradise alone? My only guess would be the Relationship System with the faux lesbian undertones. But I’ve gotten off track…

Senran Kagura is a game that you must know what you are getting to enjoy. Like all the games in this series, it is Rated M and should not be played by anyone younger than 17. It is good clean dirty fun that is best enjoyed with a bit of irony and a whole lot of “oh, Japan…” It is a worthy sequel to Shinovi Versus and helps to expand the Senran Kagura universe. The physical release is the special Endless Summer edition which includes the game (either PS4 or PS Vita, art book, one of four sets of cards featuring the girls of each faction and a 2-disc soundtrack. The game is available as a digital download for each system for a cheaper price (I paid $79.99 for the Endless Summer pack for PS Vita and $49.99 for the PS4 game as a download on PSN.
Senran Kagura: Estival Versus was released on 15 Mar 16 and is available on PSN or on online sellers such as Amazon. Some video game stores may have it in stock or can order it for you. Check your local retailer for details and pricing. 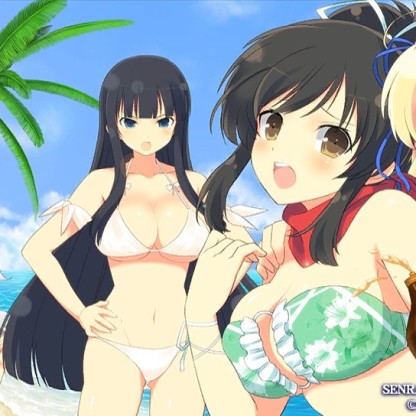 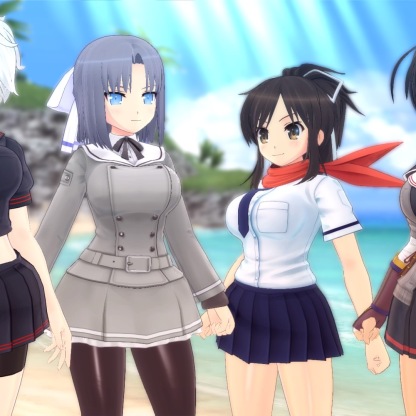 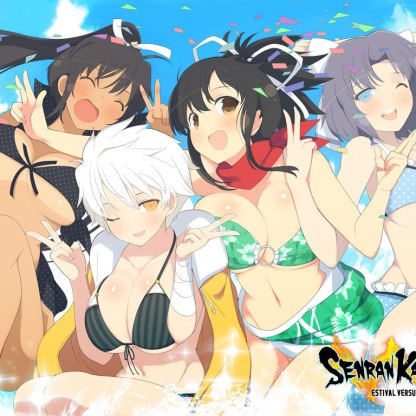