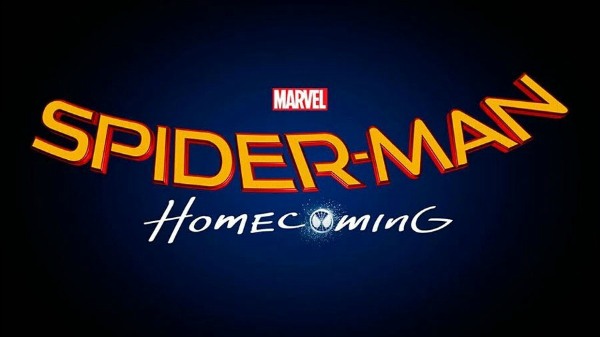 Spider-Man: Homecoming is the latest movie in the Marvel Cinematic Universe.  It is co=produced by Columbia Pictures and Marvel Studios and released by Sony Pictures.  It is the second reboot of the Spiderman franchise which started 16 years ago with Tobey McGuire.  It is a collaboration between Sony Pictures (which wns the movie rights to Spider-Man) and Marvel Studios (which is owned by Disney.)  It stars Tom Holland, Michael Keaton, Jon Favereau, Robert Downey Jr and Marissa Tomei

The movie opens up with a salvage crew, rum by Adrian Tooms (Keaton) collecting alien tech in the aftermath of the the climatic events of The Avengers.  When they are forced to halt operations  by a government organisation called Damage Control, Toombs and his crew find themselves out of work and broke.  Using some of the tech that they previously acquired, they decide to keep collecting the tech and make money developing and selling weapons.

Fast forward eight(!) years and we meet Peter Parker, fresh from events in Captain America: Civil War.  Using the new suit from Tony Stark, he patrols Queens, New York, stopping low level crime while waiting for the call to join the Avengers.  Meanwhile, he has to deal with school, friends like Ned Leeds, classmates and his over-protective (and uncharacteristically attractive) Aunt May (Marissa Tomei).

In the usual Spidey fashion, things start to turns south.  Tooms gang has been selling advanced weapons to street gangs and criminals.  Once Spider-Man interferes with a buy, he gets noticed by Tooms , who has got a powerful flying jetpack which makes him look like a vulture (so, lets call him Vulture).  Spidey fights the Vulture and comes up short, prompting a warning from Tony Start to let the adult heroes handle it.  But he persists and ends up failing and losing Stark’s trust and the suit.  But the Vulture is still out there and Spider-Man has to try to stop him, using only his powers, his wits and his home-made suit.

Spider-Man was a nice surprise addition to the Marvel Cinematic Universe when he appeared in the last Captain America movie.  Fans wanted to see the character in the proper movie universe, so the announcement of a partnership between Sony and Disney/Marvel Studios was met positively, though there was concerns.  People did not want another origin story and we already has a Spidey reboot in 2011.  I am sure some were surprised when it was announced that Tom Holland would take the role from Andrew Garfield.

But Holland fills the role nicely.  He is sufficiently geeky like Peter in the early comics but not as much as Tobey Maguire..  He is wiry and not too buff, but he looks the part.  His Spider-Man acts much like any 15 year-old with superpowers and an overly developed sense of responsibility would act.  He seems to have fun in the role and embodies the character nicely.

The rest of the cast is good too.  Peter’s friends at school, Ned, Liz and Michelle, act like movie school kids act and provide some lighter, down to earth scenes for Peter.  Flash Thompson is changed from a athletic sometime bully to a spoiled rich kid who looks down on Peter.  There is also the adults, with Happy Hogan acting like aa uninterested intermediary between Peter and Tony Stark, who is trying to encourage peter to be better than him.  Then, there is Marrisa Tomei’s Aunt May, which is the most attractive portrayal of Peters doting aunt EVER.  She acts as Peter’s grounding rod, reminding him to act like a normal teenager, blissfully unaware of his double life.  But the film does not hide the fact that she is attractive, with several characters, including Tony Stark, commenting on it.  But let’s be honest:  who wouldn’t stay for breakfast if she’d make you wheat cakes?

But the standout character is The Vulture.  Keaton plays him as a blue collar person.  He works hard for his success and hates it when the rich and powerful steal opportunities from him.  His actions may not be relatable but his motives are:  it’s family.  That gives him a certain likability as a villain.

Overall, this was a good movie.  I am not a big fan of Spider-Man in his high-school days, but this was a good adaptation of it.  The filmmakers were smart enough to realize we did not need a origin rehash so soon after the last one.  The smaller scale of this adventure, as compared to the other MCU movies is good too.  It sets up this new version nicely and hopefully will lead to more movies in this franchise.  Just avoid anything like the dancing Peter from Spider-Man 3.

I just got the latest DC Legion of Collectors subscription box from Funko today.  This month’s theme is Batman: the Animated Series, the modern classic that kicked off a wave of superhero cartoons that prized good storytelling over selling toys.   I have been looking forward to this box so lets takae a look.

The box features the silhouette of the Penguin (from his 1997 redesign when the series was revived on the WB) done in blue.  The box is rather large this month.  Other than that, it is just a box.

Opening the lid, you can see the box’s interior is decorated with art done in the DC Animated Universe style, which Batman: The Animated Series started.

On the top flap are the pin and patch, as always.  The patch features the Joker (in his original design for the series).  As you can see, it is a nice looking patch.  The pin features Catwoman (again in her original design) on top of a diamond-shaped background.

Under the flap we have the comic book.  It is a reprint of The Batman Adventures #1, which tells stories in the style and set in the BTAS universe.  This was originally published in 1992 and I remember actually having this issue.  It is a self contained story written by Kelley Puckett with art by Ty Templeton and Rick Burchett.

The T-Shirt this time features a Pop version of the Batman the Animated Series logo.  Done in black, white and red, it looks awesome on the black t-shirt.  I think I have a new favourite shirt.

Next is the Pop!  We get a Mr Freeze pop vinyl, which was the most requested pop for the BTAS pop line.  Mr Freeze’s colours are cartoon accurate and even has a dome over his head.  The body is well done, if in the standard pop stance, but there is some nice detail with his gun, and the tank on his back.  This definitely the Pop to have for any Batman fan. 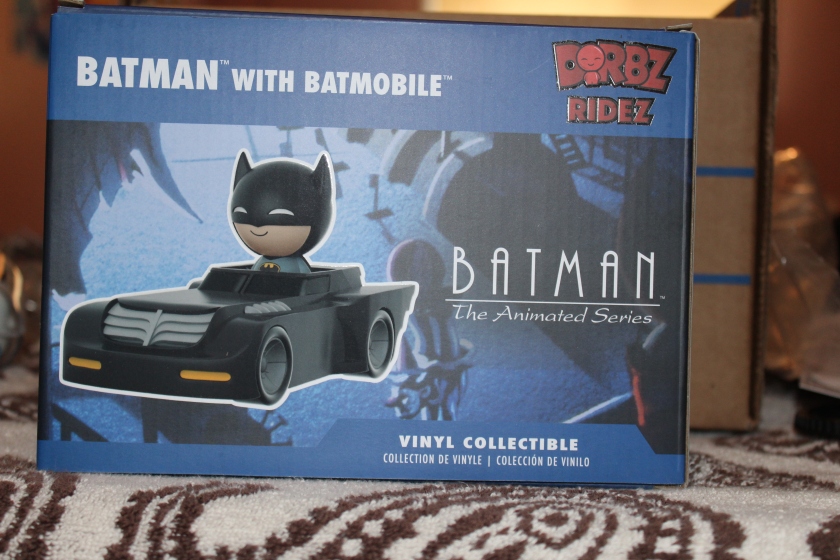 Finally, we get to… the Dorbz Ridez?.  We get a Dorbz Batman along with a little Batmobile for him to ride in.  The Batman can be taken out of the Batmobile easily enough, but the tires to not roll.   I think it is great.  I like Dorbz well enough, it is just I am running out of room with my Pops and this…this isn’t helping.  Oh, the trial of being a collector… 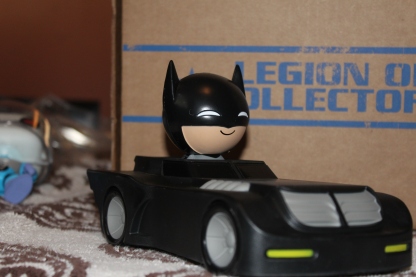 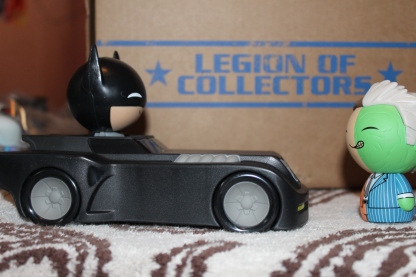 That is all for this box.  There was a lot of awesome stuff this month.  My favourite has to be the T-shirt, though.  The next DC Legion of Collectors box ships late August and will feature DC’s Most Wanted, centering on the villains.  If you wish to get the next box, you can subscribe at https://legionofcollectors.com/ .  The deadline is 1 August 2017.  By subscribing, you can order boxes from previous months like this one. (supplies are limited.)

This Review is for entertainment purposes only.  I have not received anything from Funko, DC, or Warner Bros for doing this review.  The item was purchased with my own funds.  All opinions are mine and any pictures taken are for review purposes only.