Hello.  Once again I dive into a topic that I like, but I really have little knowledge about:  anime.  I look into various series that I have watched, either recently or a while ago, and give my take on them.  I will also look into aspect that arise from cultural differences from Japan and the West, as well as any “WTF” content that may be in the anime.

A Certain Magical Index is a series based on a Japanese light novel of the same name.  The anime was produced by J.C. Staff and released by NBC/Universal Japan (formerly Genon.)  There are two seasons of 24 episodes each along with a movie continuation.  It is licensed in North America by Funimation is available subtitled on Cruncyroll and dubbed on Funimation Now streaming services.

The story is set in a fiction Japanese city called Academy City.  It is a place were students with special powers (called ESPers) go to live, go to school and learn how to best use their power.  In this universe, special abilities like, telepathy, teleportation and electromagnetism are real and scientifically explainable.  Students are tested to see if they have the potential to be an ESPer.  If they do, Academy city trains them and assigns them levels, with the highest being Level 5.  Some, however, have the potential but never tap into those powers.  They are Level 0.  Our protagonist, Touma Kamijo, is one of them.

Touma Kamijo is a typical anime high schooler, in the regards that bad and embarrassing things tend to happen to him.  Constantly late, forgetting his homework or embarrassing himself in front of the opposite sex, you’d almost think that bad luck was his super power.  Despite being labeled as a Level 0, Touma actually has a powerful ability; with his right hand, he can cancel out any super power.  Whether it touching someone using an ability, touching an object, or cancelling out an attack, he can disrupt the powers of other ESPers.  Unfortunately it cannot cancel out his own dumb luck, and that’s how he runs into Index.

Index is a young nun from the English Puritan Church.  In her head she has 103,000 magical tomes, called the Index Liborium Prohibitorum, giving her access to all sorts of magical abilities.  When she mets Touma, she is on the run from fellow wizards from the Church.  Touma finds out that magic is real, that Academy City is at odds with the various magical Churches, and that his right hand can disrupt magic as it does the “scientific” ESPer abilities.  Touma takes Index in, reluctantly becoming her guardian and becoming more involved in the intrigue between the magic community and Academy City.

Throughout both seasons, Touma deals with the various churches. Caught in a war between the English Church and the Roman Orthodox Church, he fights off bloodthirsty nuns and various magical agents.  He also prevents various magical attacks against Academy City.  That’s not to say Academy City does not have its dark side.  In one story arc, he finds himself caught up in an experiment using one Level 5 ESPer, Accelerator, killing off clones of another Level 5 to reach the next level.  With the help of the girl who was cloned, Mikoto Misaka, they try to stop the experiment and save the clones, who are not the hollow, emotionless dolls that the experimenters believe them to be.  It is definitely an actioned-packed anime.

The subtitled and dubbed version are equally good.  The translated subtitles are easy to follow and won’t leave you confused.  The dub is well done too, with the voice actors portraying the characters well.  There is no time in which you think the voice doesn’t sound right.  I think that the Crunchyroll version is a bit censored, which is often the case on that service.

As it is an anime set in Japan, it follows that the setting would reflect normal Japanese life as much as possible.  While the city is a bit futuristic and the buildings look like more modern cities,  there are still some uniquely Japanese aspects.  Bath houses (not seedy ones), vending machine serving hot drinks in a can and Japanese  shrines are all present.  The school runs 5 and a half days like in Japan and they go to school until the end of July.  None of this is jarring as you know it’s a Japanese show.

In this anime, however, the Western churches are sued as adversarial, in not downright evil organizations.  Given the setting of the anime having magic and super science, the Churches are  placed on the magic side.  They have different, yet similar names to their real world counterparts .  Although the English church is called the Puritan Church, they have nuns, which the real Puritan do not have (or magic for that matter, but, I’m sure you got that) so it is more similar to the Anglican Church, in that respect.  The Roman Orthodox Church is based on the Roman Catholic Church, an organization with its own secrets.  I am not sure if the changes to the name were done for the anime proper, or just the subtitled and dubbed versions.  In any case, some with religious sensitivities may be offended.

The WTF factor: Low-Medium As I said before, Toma has bad like, and that sometimes translates into getting in embarrassing moments with the opposite sex.  Whether it’s bursting in on Index changing, running face first into the boson of a Busty villain or inadvertently getting a peak up the skirt of a Misaka clone, these are fan service-y moments that you find in anime.  Add to that is the fact all the girls he runs into seem to develop a crush on him.  This includes Index, who, although her age is 15, looks younger.  There is some partial nudity, however and such scenes are short and played for humour.

A Certain Magical Index was one of those animes that I hear of but never really looked into it.  I had a passing knowledge of its spin-off, “A Certain Scientific Railgun,” but only due to some merchandise that I saw.  Overall, I am glad I gave this one a chance. All 48 episodes and the movie are available on anime streaming services Crunchyroll and Funimation Now.

This Review is for entertainment purposes only.  I have not received any payment for this review. All opinions are mine and any pictures taken are for review purposes only. 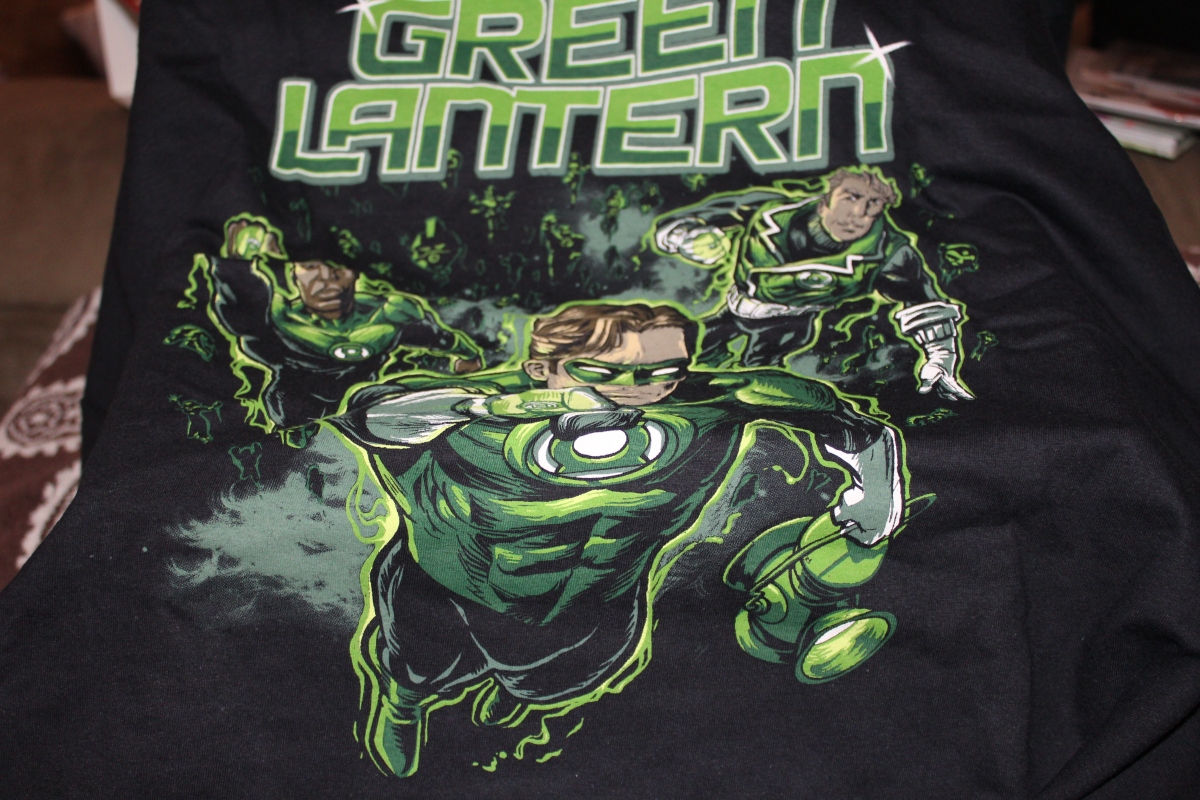 We are back, with what is. sadly, the last box in the Funko DC Legion of Collectors Box.  The final box features the emerald protectors of all  3600 Sectors of the Universe, the Green Lantern Corps.  So, don’t be a “poozer” and read on as we look into the box!.

The cover features the silhouette of Green Lantern Hal Jordan on the box.  The Legion of Collectors logo is there, as always.  Moving on.

The liner features some Silver-Age artwork, featuring Kilowog, Hal Jordan and Sinestro in his classic outfit and in his Green Lantern duds.  Once again, it looks nice.

No patch or pin this time.  The t-shirt is this black Green Lantern shirt, featuring Hal, John Stewart and Guy Gardner flying out front, with other Green Lanterns hanging in the background.  The art gives me an early 90’s vibe, I’d say around the Green Lantern: Mosaic era (mostly because there is no Kyle Rayner.)  It also looks like Hal has grey in his hard, as he did in the comics at that time.  It’s a good shirt and the not pop style is appreciated. 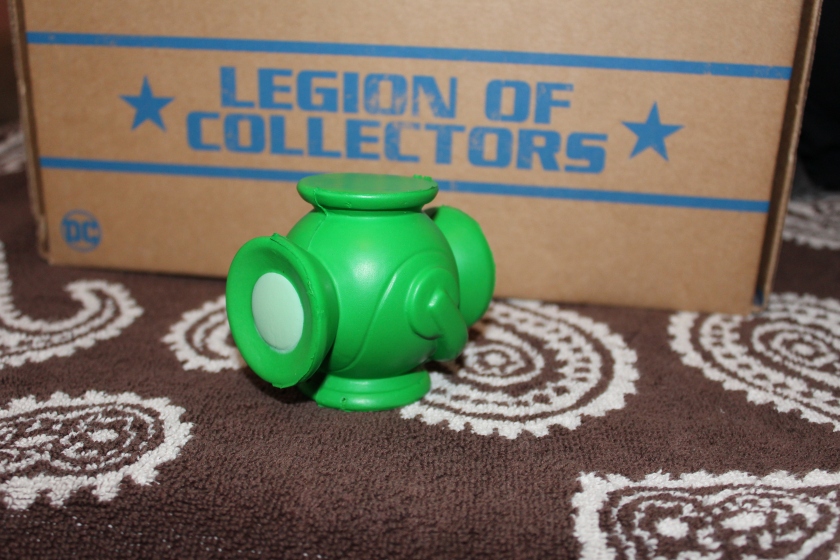 We also get this lantern-shaped stress toy.  It is fairly squeezeable and can be used as you worry over how you’ll get your DC pop vinyl fix without the subscription.

Next, we get this set of Green Lantern Pint-Sized heroes.  We get these ridiculously cute version  of main GL Hal Jordan and his arch-nemesis Sinestro.  Sinestro is even in his modern Sinestro/Yellow Lantern uniform.  These always give be a Fisher-Price Little People vibe, which, to be honest, is a bit weird.  Still, more nic-nacs for your shelf. 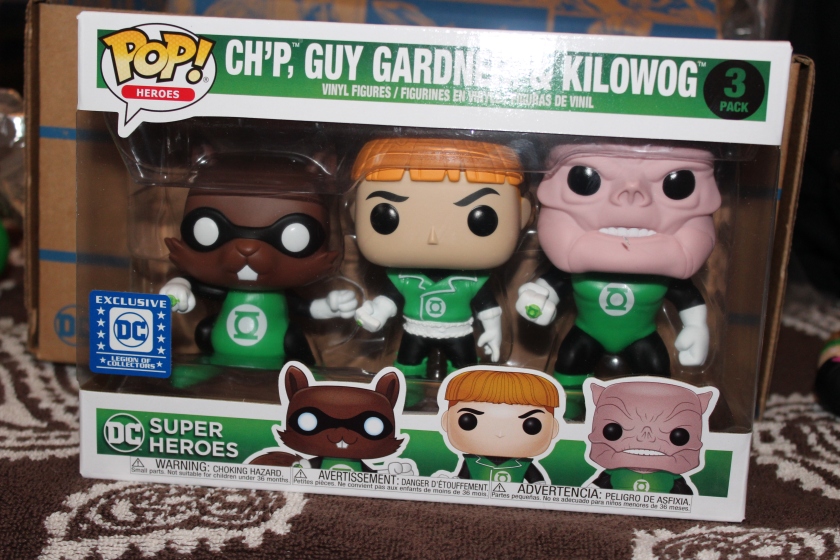 For the last Pops in this subscription, we get a three pack!  We get three Green Lanterns; Ch’p, Guy Gardner, and Kilowog.  Each figure is a different sculpt and size, which gives you three unique Green Lantern Pops for your collection.  I was personally hoping for a Ch’p pop and Funko came through.  You got to love a sentient chipmunks wielding a power ring!

This box is what a  Green Lantern Corp box should be.  With so many different, unique characters showing up in the comics over 60 years, the only way they do the box wrong was to only focus on Hal Jordan and Sinestro.  Both Guy Gardner and Kilowog have their fans and Ch’p was too of a unique character to not make into a Pop.  The shirt, stress toy and Pint-Sized heroes were all great, but the Pops make the box, as it should be.

Sadly, this is the last box in the Legion of Collectors subscription.  You can go to https://legionofcollectors.com/  to find out more, but they haven’t really said what the next step is.  Those who had a subscription can log in and buy this or any other box that they have left in stock.  Supplies are limited, though.

This Review is for entertainment purposes only.  I have not received anything from Funko, DC, or Warner Bros for doing this review.  The item was purchased with my own funds.  All opinions are mine and any pictures taken are for review purposes only. 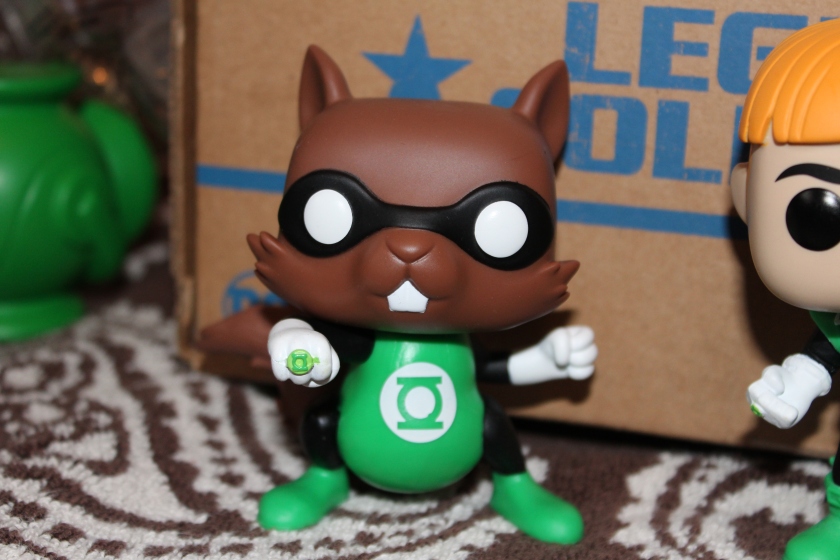