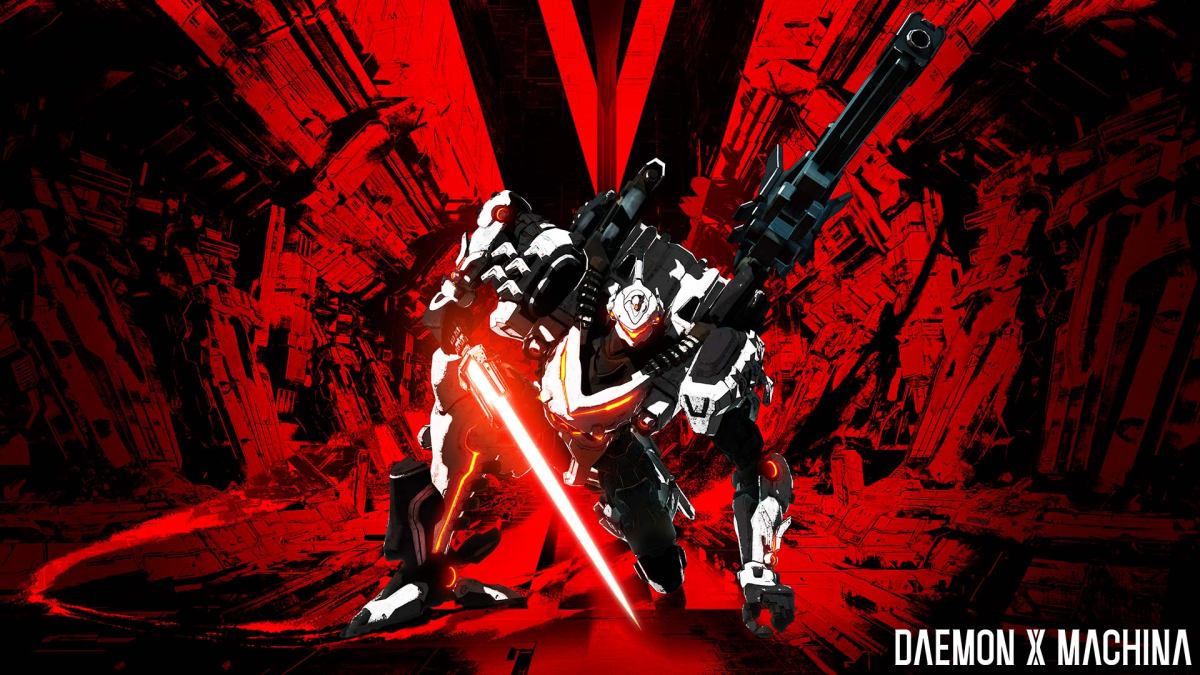 Note:  Although this is not a paid review, I did win a free copy of the game I am about to review for Steam.  I bought the Switch version with my own money though.

Daemon X Machina is a third person action shooter.  It was developed by Marvelous First Studio.  It was first published for the Nintendo Switch by Nintendo.  A PC port was released on Steam by XSeed Games in early 2020.  The development team included former members of From Software, known for their Armor Core series on PS2.

The game takes place sometime in the future.  Some time ago, the moon fragmented and pieces fell to Earth (at least I assume its Earth,) annihilating most of civilization.  This event is referred to as Moonfall.  The moon fragments released a particle called Femto into the atmosphere.  This causes all Artificial Life (AI) to become sentient and rebel against the remaining humans.  These AI called Immortals, continue to corrupt other AIs and plague humanity.

Femto also had an effect on humans.  Some were born with sharper minds and quicker reflexes.  Called Outers, these men and women were equipped with robots called Arsenals, which they pilot to fight the Immortals and other corrupt AI.  Now, they are mostly mercenaries, hired by one of the four Factions vying over control of a ruined land.

In the game you start out as the Rookie, a recent addition to the mercenary ranks of Orbital, a corporation that organizes contracts for the other factions.  You character is fully customizable from the gender to the hair to the facial features.  Once you arrive at Orbital, you get assigned you own Arsenal by your coordinator AI, Four, and go on a training mission.  The Arsenal is customizable (colour, patterns and decals can be chosen) but the main was to improve you Arsenal to is take parts and weapons from other Arsenals you defeat.  This can change the look of your Arsenal.

Your character be improved too.  A body modification shop is available almost from the start in which you can spend your hard earned credits on various implants.  They could either improve you Arsenal buy allowing faster movements or less energy consumption or improve your Outer, giving your pilot better vision, cybernetic legs for faster running or jumping, a built in laser sword in your arm or even a built in jet pack.  Some mods will drastically alter your appearance and you can even go full cyborg, if you like.

Game play is a third person mech shooter.  Enemies come at you from all angles and you can attack on the ground or in the air.  Usually you have allies to help you in the battle, but, like all games, don’t expect too much from them.  The mission’s success is all on you.  You can even leave your mech and fight on foot.  There are even missions in which you are without your Arsenal.  Unless your Outer is fully modified, I would avoid taking on mission outside your Arsenal.  Even them, it would be a challenge.

Enemies vary by mission.  Mostly you fight off corrupted AI drones, tanks and cannons.  You also face off against AI controlled Arsenals. This is where you get new weapons and parts for your mech.  Then there are the Immortals.  They can vary in size and shape but they are usually large and very, very tough.  But, maybe the tougher enemies are your own fellow Outers.  You will find yourself on mission in which two rival factions ordered mission with opposing goals.  You can be working with one group one mission and be fighting them in the next.  Most Outers see this as merely business and will gladly do the mission, but it does not go unnoticed when each mercenary group is increasingly pitted against each other.

The game is reminiscent of From Software’s Armoured Core series, which is also a mech game.  But Daemon X Machina is more arcade like.  If Armoured Core was skewed more towards Mech Warrior fans, Daemon X Machina is trying to attract fans of anime like Mobile Suit Gundam and its numerous spin-offs.  Like Gundam, the mech designs are more fanciful, being more sleek and lithe than the bulky tank-like mechs from Armour Core or Mech Warrior, The move faster and fly higher that they should be able to.  Like Gundam, however, there are still limits.  Power levels, ammo count and armour all can go down.  You can still recover stamina, find ammo or repair your ship with pickups from downed enemies or items on the battlefield.

The PC and Nintendo Switch versions are similar.  They both play the same and the graphic are the same on the PC as on a docked Switch.  The only real difference is the DLC.  Both versions offer additional hairstyles outfits and customization pieces for your Outer.  There are also additional skins for your Arsenal, which will let your mech have a certain design no matter what parts are used.  The only difference is that the Switch version have a free download that gives you edit parts to make your character look like either Geralt or Ciri from the Witcher (the Japanese Switch version has outfit and mechs from anime like Eureka Seven and Code Geass.)

Overall, I liked the game.  I haven’t played a Armor Code game in years and always wished the Gundam games we did have allowed for some customization.  This games allows you crate your character, pilot a mech and improve it.  There is even online so you can take on mission in a group or fight against other players.  Fans of the Armored Core series, the Gundam series or mecha anime in general should check it out.

Daemon X Machina is available for Nintendo Switch and PC via Steam.

This Review is for entertainment purposes only.  I have not received anything in exchange for this review.  The item was purchased (or won in an unrelated giveaway) by myself with my own money.  All opinions are mine and any pictures were taken by me and are for review purposes only.